About a quarter of a million bees called the Bronx home this spring and summer, residing in four colonies on the rooftop farm at the SBH Health and Wellness Center. 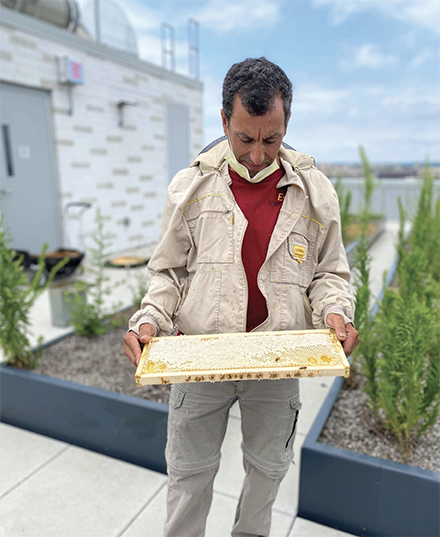 In what beekeeper Eric Hanan of Bee Haven Bees calls a very favorable environment, the bees produced approximately 210 pounds of honey from spring and fall harvests.

“This is an extraordinary yield that exceeded my expectations especially for first-year beehives at a new location,” says Hanan. “Surplus yields of honey are typically closer to 30 – 35 pounds of honey per colony.”

He says it is impossible to make predictions going forward about the honey yield since so much is based on environmental conditions beyond one’s control. He cites such factors as the strength of the queen and her colony heading into winter, a particularly cold or warm winter, the threat of spring rain washing away nectar producing plants and flowers, varroa mite infestations, and a myriad of viral and bacterial diseases that can effect honeybee health and honey production.

“Some locations do better than others based on the proliferation of honeybee populations, honeybee friendly plants and trees, but this is farming so things often change year to year,” he says. Hanan and his bees created a good deal of excitement in the Bronx during the warmer months, as television news stations and newspapers from around New York City came to the rooftop farm to pay homage to the bees and speak with Hanan.

Hanan also spent time discussing all things bees on SBH Bronx Health Talk, the hospital’s weekly podcast. Here is an excerpt from it:

Q. Can you tell us about the bees on the rooftop farm?

A. We installed nucleus colonies of Italian honeybees where you have a queen, lots of the queen’s worker bees, the female bees, and a bunch of drones, honeybee colony in my backyard to now 80-plus honeybees all across the tri-state area.

Q. What do you find especially remarkable about the microsystem of bees and how they work together?

A. They have something called a youth social existence where they operate in complete harmony to take care of whatever needs to be done inside that beehive. It’s all for one, one for all. Depending on the season they will heat up the hive and keep the queen at about 93 degrees in the coldest days of winter by eating honey and changing those sugars into energy and heat. In the hot summer days they will spend time cooling the hive by fanning from the entrance. You’ll see the bees fanning air in and other bees that we can’t see inside the hive fanning from the opposite direction and blowing air out if wax needs to be made for cells. If an intruder attempts to get into the hive, like another bee that doesn’t belong or a rodent, they will defend the hive together. Every decision is made collectively and. it’s kind of a beautiful thing to watch.

A. Well, we harvest what we deem as a surplus supply of honey that the bees have produced. They do such a good job at making honey that they end up bringing back more nectar and honey than they could possibly ever eat over the winter. We pulled a box of those four box hives from each one of the four colonies and brought them back to my honey house. We take those frames of honey out of the boxes and use a multi-tuned fork to carefully remove the caps on each one of those wax cells to expose the honey. Those frames end up going into a centrifuge which is an extractor and the centrifuge spins the honey, which flies out of the the male bees, all in a four or five frame package that we installed into the regular size larger boxes that are located on the roof. We fed them a little bit of sugar water to get them off to a strong start in the event that there may be some foul weather. Once they’re placed up there they’ve got plenty of food to eat and once the queen realizes that she’s got plenty of food and resources she’s laying eggs like crazy to the tune of about 2,500 eggs a day. Those eggs turn into full-size worker bees about 21 days later and they start their life about three weeks inside the colony working at different tasks and the second three weeks of their life for a total of about six weeks is spent running two miles in every direction to gather nectar and pollen and produce honey.

Q. You were a TV producer for many years. What drew you into the life of bees?

A. Working in television as a news magazine producer I was constantly exposed to different fields of work and professions and got some great access to different livelihoods. I always kind of had a tug though to be a gentleman farmer I guess or being outdoors more than in the office writing and editing and while I enjoyed a 20-year stint at various networks learning a lot and getting a lot of fulfillment out of that profession, I answered the tug after meeting a fellow beekeeper at a sheep shearing festival out in western New Jersey. He had an observation beehive where you can see the honey bee behind glass and I was hooked. I took a class on beekeeping with the state and learned some basics and with his help I was an apprentice and we formed this business so I went from a hobby of keeping a cells and onto the sides of the centrifuge down into the bottom and we simply put it through a sieve and into the jar.

Q. The first harvest produced a very light, yellow colored honey. Will the next harvest look the same?

A. The fall honey is typically a completely different product because of the different flowers that are available. It’s darker, almost like a Coca-Cola color, whereas the spring honey that we just pulled was light and it will have a different taste and smell and viscosity.

Q. What does the science tell us about the benefits of honey in general?

A. Oh, my gosh, it’s great for you. It helps rejuvenate your health basically. Local honey is good to help eliminate seasonal allergies because you’re getting all those pollens in liquid form that help inoculate you against the airborne pollens. There are tons and tons of anecdotal research about health benefits both topically for wounds and burns, but also internally for different cancers, soreness on your throat. It’s antibacterial. There’s another product in the hive that you don’t get a lot of press on but it’s called propolis and it’s a gluten sticky substance and they use that material to seal holes or gaps in their beehive particularly during the winter to eliminate any wind and draft and that propolis is being used in pharmaceutical and medical situations where for example Johnson & Johnson will harvest a pharmaceutical grade propolis and use it to coat the ribs of open heart surgery patients. Honey is such a healthy local product. There’s no adding or subtracting to it. You’re simply pulling it off the beehive and getting it into the jar similar to tapping a maple tree. You don’t add or subtract from that maple syrup, well in that case you boil it down but with the honey you simply extract it at room temperature. It takes its time getting through the sieve and into the jar.

Q. And what about the benefit of the bees themselves?

A. Well now there’s also a benefit in just having a lot of bees around for the neighborhood. Everybody’s gardens should do better if they’re fruit or vegetable producing gardens. Those vegetables will both be larger and in better shape and more plentiful. The bees are responsible according to the United States Department of Agriculture for one out of every three bites of food that we eat. So without the honeybees, in California, for example, there would be no almond harvest. The almonds groves are completely dependent on honeybees and in the Bronx all the trees and apples and whatever is around benefit from those honeybee pollination services and they’re going two plus miles in every direction of that rooftop so they’re covering almost 10,000 acres of property from the center of the roof.

Q. Are there turf wars among bees I mean you’re bringing these New Jersey bees to live here with Bronx bees. Is there any concern?

A. I’ve heard a little bit about honeybees competing for the same resources as local bees, but those are native bees to whatever area they’re in and I don’t know a lot about it. Given the success that we’ve had I think that there are plenty of resources for any bees whether they’re native local bees or honeybees so we’re in good shape there.

Q. Is there any reason that people living within proximity of the rooftop farm have to worry about being stung because there are more bees in the area?

A. I‘ve found that bees are extremely hesitant and docile when it comes to stinging, particularly when they’re not protecting their beehive. So if a bee is out foraging for nectar or pollen on a flower and a person comes along, he will leave well before the person gets close to it. If, however, a person with bare feet happens to step on a honey bee on a dandelion or a clover by accident the bee thinks that its life is being threatened and its last course of action is to sting. It really is a last course of action because once that honeybee stings it loses its own life and they seem very conscious of that fact so unless they’re defending the beehive and unless they are sending out a pheromone that says we have an intruder and we need to protect the queen and protect our resources those things are very, very reticent to sting.