“Glaucoma is a devastating disease.” 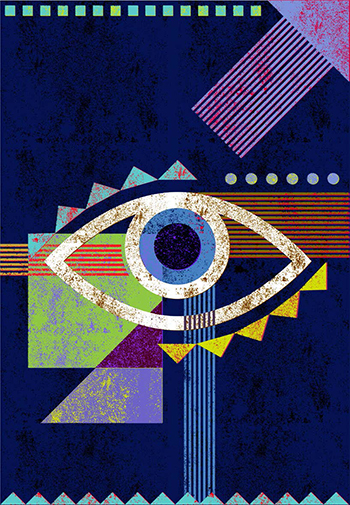 This is a phrase that Dr. Michelle Packles, an ophthalmologist at SBH, uses regularly when discussing an eye disease that affects an estimated three million Americans. What makes it particularly troublesome is that only about half of these individuals know they have it. Glaucoma is the second leading cause of blindness in the world. It is a progressive disease, and a largely silent one that when not managed properly will rob people of their sight.

That’s why annual screenings, she says, are critical.

“The whole goal of screening is to catch the glaucoma early when it can be managed,” she says. “If they are at the end [of the disease], there is nothing you can do other than try to keep what sight they already have. You can’t do transplants or heal a patient’s optic nerve. That’s why it is so important to follow patients, to get baseline exams and compare these to those of future visits to see if there is a difference.”

Working in the Bronx for a short time, after having practiced in Brooklyn, Manhattan and Long Island, Dr. Packles says that she’s been surprised by the number of advanced cases of the disease she’s seeing.

THOSE MOST AT RISK

“The cause of glaucoma is not well understood,” Dr. Packles says. “The message for other physicians is to ask about family history and to know that African-Americans get hit the worst, as do Hispanics. That’s why our population in the Bronx is so susceptible, combined with the fact that many probably don’t get the follow-up care they need.” Research shows, for example, that Blacks are 15 times more likely to become visually impaired from glaucoma than Caucasians. Older patients, particularly those over 60, and those with a family history are most at risk.

Her heart goes out, she says, to patients like the 55-year-old Hispanic man she saw recently. “In one eye he was unable to see light, the other had only a tiny island of vision. What I saw was a very advanced case. I am going to follow him closely to try to preserve whatever vision he still has. But it’s late in the game.” Glaucoma damages the optic nerve, the cable that connects the eye to the brain. Any damage to this delicate nerve tissue, either through trauma or disease, can result in tunnel vision as peripheral or “side” vision deteriorates or is lost. Once this happens, the patient may only be able to see things in a small circle directly in front of their eyes, as if they were looking down a tunnel.

“Glaucoma affects the drainage of the eye,” says Dr. Packles. “I always make the analogy to a sink. Water comes out of the faucet, but the drain doesn’t function well. If the drain is clogged or damaged, the water will accumulate. As a result, the water level rises similar to the way the intraocular pressure builds in the eye. Fluid inside the eye is continuously produced, but doesn’t drain from the eye well. With high intraocular pressure, there is greater pressure on, and resulting damage of, the optic nerve at the back of the eye. If the optic nerve is damaged, the visual information cannot be sent to the brain, and vision is not possible.” Open angle glaucoma is the most common type of glaucoma in this country. The drainage structure (or trabecular meshwork) in the eye may appear healthy on an exam, but the intraocular fluid doesn’t flow out like it should. Dr. Packles says she is also seeing many patients with a history of eye trauma. An increase in intraocular pressure following trauma can result from hyphema, or the pooling of blood inside the eye’s anterior chamber. The blood can collect within the trabecular meshwork, which “clogs the drain” of the eye. Another concern with an acute case is the potential for the development of peripheral anterior synechiae, or adhesions (scar tissue), that form between the outside of the iris and other structures of the anterior chamber. These adhesions block the normal outflow of aqueous humor and can also result in the buildup of fluid in the eye.

“I saw a woman last week who had trauma at the age of five. She’s now over 60 years old, and I had to operate on her because medications no longer work to lower her intraocular pressure,” says Dr. Packles. “Her [eye] pressure was sky high. People who have had trauma and weren’t evaluated and treated can have irrevocable vision loss. Glaucoma can happen in the traumatic eye, but these people also have an increased risk of getting glaucoma in the eye that did not receive the trauma.”

Testing for glaucoma is non-invasive. It may include something as simple as a visual field test (a computerized test of one’s peripheral vision) and a few photographs. A confrontational visual field is a simple, quick test that any physician can do to screen for advanced disease (this test will not pick up mild or even moderate disease).

“You would cover your left eye and I would cover my right eye,” says Dr. Packles. “You look at my nose. You are going to tell me when you see my finger from the sides because glaucoma effects the side vision.”

Dr. Packles stresses that glaucoma treatment can manage, but not cure or prevent this potentially blinding disease. “We can’t stop glaucoma,” she says. “But if caught early the likelihood of vision loss is lower.”

Medication in the form of eye drops can increase the flow of the water draining from the eye. When the drops stop working, or cause problems like dry eyes, laser surgery may be used to lower the intraocular pressure. Various surgeries, including MIGS (for minimally invasive glaucoma surgery) for those with mild or moderate glaucoma, may be indicated. MIGS offers few risks, a short hospital stay, minimal post-operative care, and a short recovery period.

“I always tell patients who have surgery that, ‘You are not going to see better after surgery.’ What patients have to understand is that if the surgery isn’t done, they are going to lose their vision, or it will progress much faster.”

She reiterates that glaucoma is a devastating disease.

“Neither the laser surgery nor the medication lasts forever,” she says. Catching these patients early on is key because you have more time to work. It buys you time.”